Estate Planning – Something You Shouldn’t Do Yourself 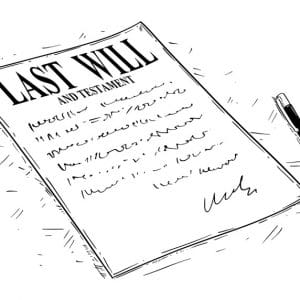 My Last Will and Testament
Bill Murray
I leave to Joel Murray
Everything I own
P.S. Bury me in Malibu
4-8-04

The court heard the petition for formal probate and Joel introduced testimony from seven witnesses, most of whom testified that the signature and all portions of the document were in Bill’s handwriting. The court found that Bill’s signature was his signature based upon the evidence offered. The court also held that the clause “everything I own” was not in Bill’s handwriting because the ink appeared lighter, the handwriting slanted differently, and that clause was smaller in text and printed when the remainder of the document was a mix of cursive and print. According to the court, “everything I own” was a material clause, required under North Dakota law. Without the material clause, the document failed to express the donative and testamentary intent necessary for a valid holographic Will. Joel appealed the lower court’s findings, but the higher court ultimately agreed with the lower court findings.

Even in those states that recognize holographic Wills, uncertainty looms when folks create do-it-yourself estate plans. For example, consider the estate of the Queen of Soul, Aretha Franklin. Aretha died in 2018, presumably intestate. Under the laws of Michigan, that meant the distribution of her estate equally among her four children, one of whom has special needs. A few months later, while clearing out Aretha’s home, her niece found three handwritten documents expressing conflicting testamentary directions. All three contained illegible portions, and Aretha failed to execute any of those documents with the requisite formalities for a Will. Although an expert confirmed that all documents were in Aretha’s handwriting, much remains unclear, including whether the documents were simply drafts or her do-it-yourself final estate plan. Sometime later, one of her sons obtained a fourth will along with Aretha’s handwritten notes from a law firm Aretha allegedly had engaged to help her complete her Estate Planning. That son submitted these documents to the probate court and requested that the court admit the documents as his mother’s Will. Although a trial was set to occur in August 2021, no formal opinion has yet been issued. Aretha’s family has waited over three and a half years for distribution from the estate. Are they a “Chain of Fools?” Perhaps it’s time to “R-E-S-P-E-C-T” Aretha’s written instructions; determining those instructions remains the problem.

As the North Dakota case and Aretha’s estate illustrate, holographic Wills and do-it-yourself plans create ambiguities in many situations. Lack of clearly defined beneficiaries, too many beneficiaries, and failing to account for the death of a beneficiary all exacerbate the issue. Legibility and authenticity pose problems as well. Finally, although not discussed in the above examples, consider what happens if the holographic Will or self-created plan disposes of only part of the estate or disposes of assets that the testator does not own. Holographic Wills and other do-it-yourself plans often fail to account for unique circumstances because the author lacks the specialized knowledge of an experienced Estate Planning attorney. Leaving something as important as the distribution of assets upon death to a holographic Will or self-created plan leaves the testator’s family vulnerable to in-fighting, wastes time, and causes significant expense.

Holographic Wills and self-created documents complicate, rather than simplify, an estate. It’s important to speak with a qualified Estate Planning attorney regarding your estate plan and your unique circumstances. Many Estate Planning attorneys recommend the use of Revocable Living Trusts as Will substitutes to avoid probate and to provide certain other protections during life, including simplified asset management during periods of disability. If you have a holographic Will, a self-created estate plan, or have considered writing one, don’t! Instead, consult with an Estate Planning attorney who can ensure that the documents you sign are legally valid, distribute your assets in accordance with your wishes, and account for your distinct circumstances. Save your loved ones that time and expense.